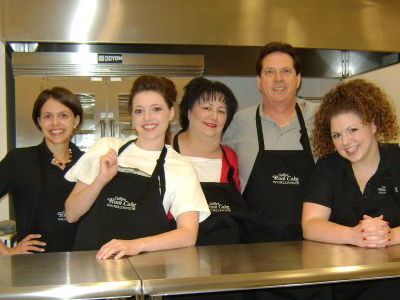 On July 1, 2009 Lisa Power and her husband (Kelly) and three daughters (Madison, Lauren, and Megan) opened their state-of-the-art cake factory in Gilbert, AZ. Over the past decade their bakery evolved from shipping to all 50 states, to focusing on a large local retail presence. But, in case you don't know the whole history...here's how it all began:

Lisa and family are no strangers to the bakery industry, as Lisa's mother Cathy started Cathy's Rum Cake and Catering on November 5, 1975. Lisa worked alongside her mom from day one and was in charge of the entire cake department. She oversaw all the production, cake decorating, ordering, and customer service. Over time, our family recipe for Italian custard-filled cakes became an iconic dessert in the valley, serving celebrities, politicians, and public figures.

Kelly met Lisa while catering part-time for extra money, in addition to his duties at his family's farm, Power Ranch. The two fell in love, said "I do," and created the next generation of "rum cakers." Their three daughters grew up in the bakery from infancy. From local TV appearances, to attending catering parties for local celebrities, the girls grew to love and cherish the family business, and follow in their mom's and Mimi’s footsteps.

As the years passed, Cathy's Rum Cake® grew in popularity boasting three locations. Kelly, who was now a mechanical engineer, still worked on the weekends delivering wedding cakes, as it was all hands on deck! People were ordering cakes for all their most special occasions, making the rum cake apart of their family traditions. With that, and as the World-wide web developed, customers started inquiring about having their favorite cakes shipped to their loved ones out of state. Cathy didn't think it could be done, due to the fragile nature of the product, but Kelly was a seasoned engineer and decided that after all the wedding cakes he delivered, he knew exactly how he could help his mother-in-law ship her famous cakes across the United States. Unfortunately, Cathy wanted to focus on local traffic, so in 2001 Kelly and Lisa approached her about buying the license to ship and produce the cakes themselves. Cathy agreed and that was how Lisa and Kelly started what became Cathy's Rum Cake Worldwide.

For the next several years, Kelly went on to design a custom shipping box, build a thermal test chamber, and convert the famous cake recipe into ounces and pounds (instead of pinches, dashes, and scoops). As an engineer, he was very detailed about quality control and consistency. The original plan was to purchase cakes wholesale from Cathy, and operate the shipping business out of her main hub in Chandler. But as the huge quantities of packaging and shipping materials rolled in, Cathy recommended that her daughter and son-in-law should get their own facility. Cathy's suggestion was brilliant.

February 29, 2008, Kelly and Lisa purchased our little industrial building located just a few miles West of Downtown Gilbert. Kelly immediately went to work on designing a high-tech cake factory, with the help of a food architect. After months of getting plans approved by the Town of Gilbert and Maricopa County Health Department, construction to transform our bare concrete facility into a bakery began, in March 2009.

On July 1, 2009, Cathy's Rum Cake Worldwide (CRCW) opened as an e-commerce bakery. Customers could order 24/7 online to have cakes shipped to any state. Since Cathy's Rum Cake Caterers (CRCC) was only a few miles away (in Chandler), Lisa and Kelly didn't pursue a local retail model because they didn't want to diminish Cathy's retail traffic. Unfortunately, the economy tanked and the cost of shipping skyrocketed beyond anticipation. This made our business model pivot to local retail and wholesale. After a year and a half in business, there was much confusion between CRCW and CRCC; customers would call Lisa for catering and Cathy for shipping. Despite having sold the rights to Kelly and Lisa (and their 100% shipping success rate to all 50 states), Cathy’s disbelief in shipping was continually expressed to those who asked her about it. This was upsetting and challenging. Between the misinformation and Lisa's improvements to her family’s cake recipe, people started turning to Lisa to change her business name. So in January, 2011, Lisa's Rum Cake® was born.

Our bakery is a labor of love and team work. Lisa stays busy answering phones and managing customer service. Kelly manages the baking and assembly, while continually brainstorming how to make our cake factory more lean. Madison heads the cake decorating, product development, and marketing. Megan focuses on social media, graphic design, and flavor development. Lauren is our head sales person, but is also a full time second grade teacher: she is at the bakery on most weekends and holidays helping customers and making sure we stay organized. Lauren, Megan, and Madison observed their whole childhood, how their grandmother didn’t sell cake by the slice. Knowing there was a demand and opportunity for more people to try the cake, they created Cake CUTS®, which are individual slices. CUTS can be found around the valley at local restaurants, wine bars, and coffee shops, as well as daily in store. Another great product the girls created were Cake Pies, which are made with a single layer of cake instead of crust. They have transformed Cathy’s Rum Cake from an occasional dessert to a dessert for any occasion.

Beyond the new products, making the rum cake on-demand, and expanding Cathy’s original menu to over 70 flavors, the most important part is how Lisa and family have utilized modern technology and social media to bring their time-honored family tradition to the 21st century.

From one generation to the next, we look forward to serving you.

Create an account with us and you'll be able to:

Fill in your email below to request a new password. An email will be sent to the address below containing a link to verify your email address.